RUNSEWE CALLS FOR CULTURAL RELATIONSHIP BETWEEN NIGERIA AND BANGLADESH 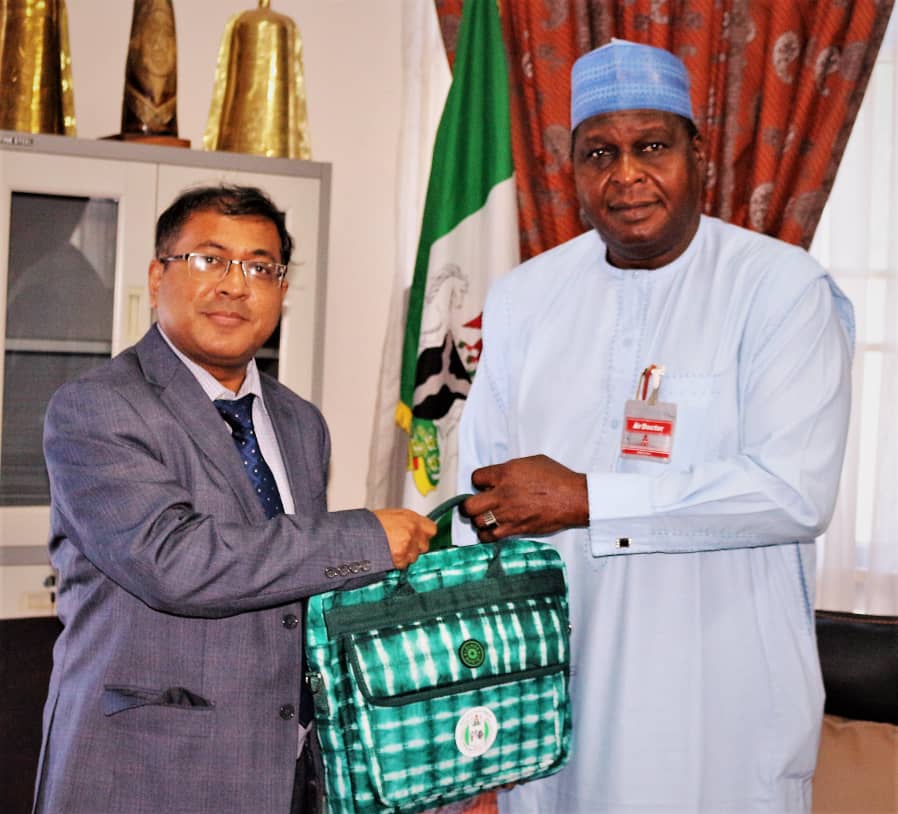 The Bangladeshh Ambassador to Nigeria, His Excellency, Mansudur Rahmam receives a gift from the Director General NCAC, Otunba Segun Runsewe

The need to further establish and reinforce the mutual cultural relationship that exists between the Peoples Republic of Bangladesh and the National Council for Arts and Culture (NCAC) and the Federal Government of Nigeria that dates as far back as 1971 has been emphasized. This diplomatic relationship should be explored for the benefit of mutual cultural benefits for both countries.

The Director General, National Council for Arts and Culture (NCAC), Otunba Segun Runsewe stated this when the High Commissioner from the Peoples Republic of Bangladesh, His Excellency, Masudur Rahman paid him a courtesy visit in his office in Abuja. Runsewe noted that Nigeria has benefitted a lot from the mutual cultural relationship with Bangladesh in the areas of education, poverty eradication, trade and many more, adding that both countries share similar values and ideals as common members of United Nations, Non Aligned Movement, D8 Group of Nations etc.

According to Runsewe, “it is worthy to note that in March 2016, Bangladesh exited the group of low income countries which Nigeria still belongs to as a member of Least Developed Countries.
At the meeting held at NCAC headquarters in Abuja, Otunba Runsewe took his time to inform the High Commissioner on the forthcoming programme of NCAC called the International Arts and Crafts Expo (INAC) and seek the participation of Bangladesh in INAC and in other NCAC activities.

He also sought partnership with the Republic of Bangladesh in organizing a joint exhibition in Nigeria and in Bangladesh noting that this will be very rewarding to both countries.

On capacity building, the NCAC boss pledges mutual collaboration in scientific research, energy sector and cooperation in investment promotion, information sharing, poverty alleviation, women empowerment and cultural development.
He told Masudur Rahman the need to collaborate with NCAC on capacity building and cultural exchange noting that NCAC had a very cordial relationship in these areas with the previous High Commissioner and he would like him to maintain it.

In responding, the High Commissioner for the Peoples Republic of Bangladesh, His Excellency Masudur Rahman told Runsewe that he is aware of the cordial relationship that exists between NCAC and Bangladesh and promised to sustain it. Rahman said that he hopes to continue the tradition of exchange of cultural troupes and will soon plan a visit for Nigerian cultural troupes to visit Bangladesh. He added that his country has great support for research and scholarship schemes that Nigerians can explore.

Like his predecessor, Rahman promised to participate in all NCAC programmes including having a whole day to celebrate his country’s 50th Independence anniversary during this year’s INAC 2021.