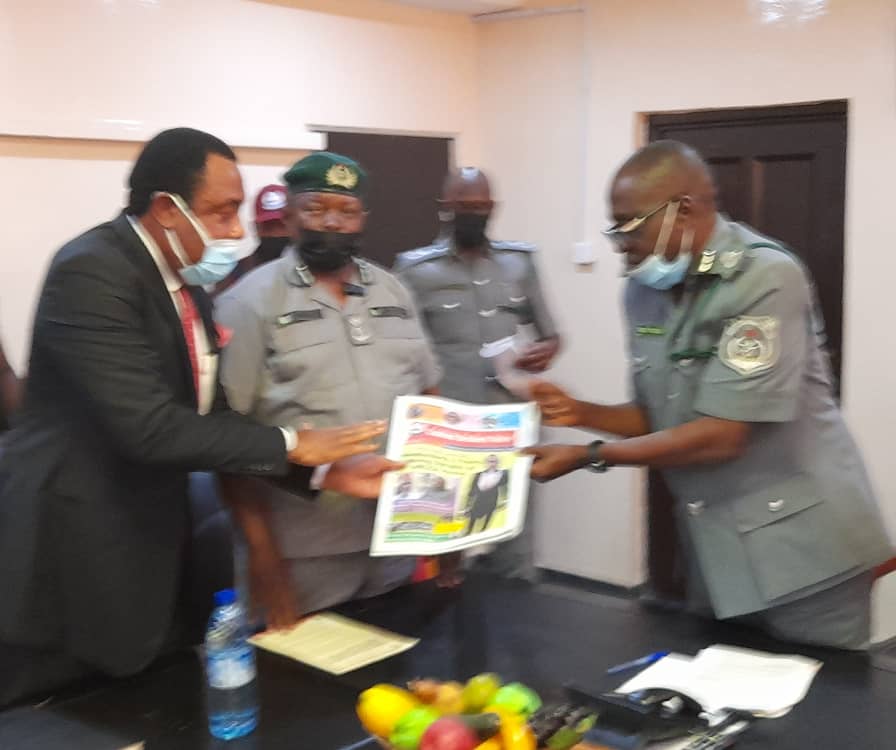 ANLCA president, Tony Nwabunike, presenting the in house publication of ANLCA, “Customs Brokers Voice” to the CAC of Tin Can Island Command, Comptroller Musa Baba Ahmed, during the visit on Thursday.

The National President of the Association of Nigeria Licensed Customs Agents (ANLCA), Tony Nwabunike with his National Executive Members ( NECOM) on Thursday paid a courtesy visit to the Customs Area Controller of the Tin Can Island Command, Comptroller Musa Baba Ahmed and his management team. 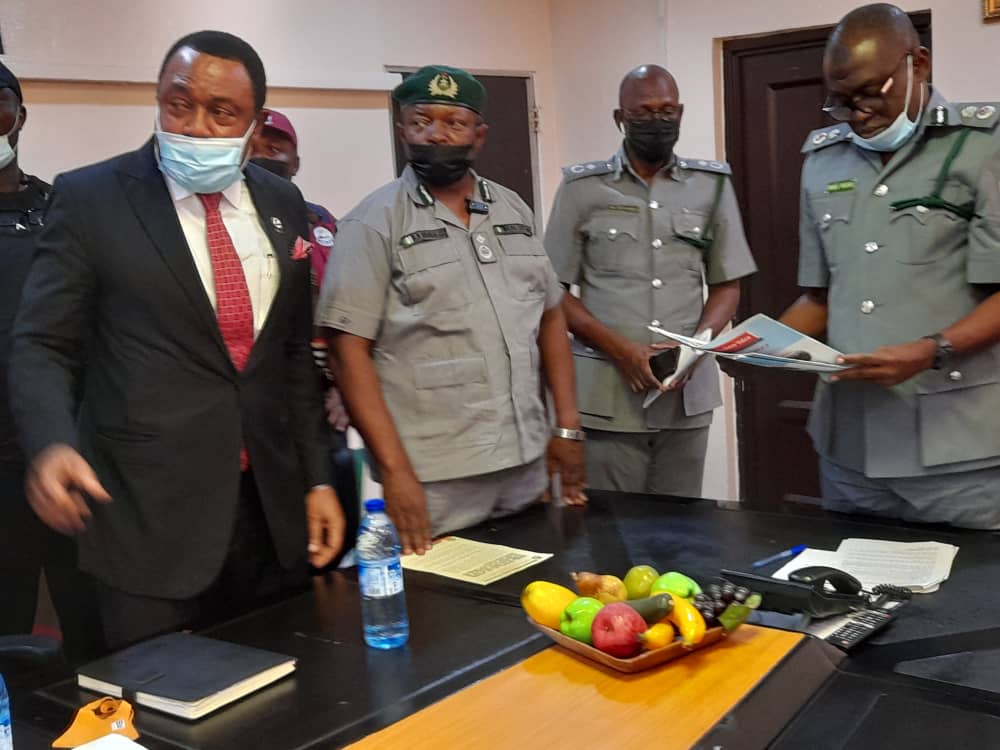 ANLCA president, Tony Nwabunike and ANLCA , Tin Can Island chapter Chairman Ojo Peter, addressing their members at the Tin second gate on Thursday during Nwabunike’s visit to the chapter.

The ANLCA president’s visit which attracted a mammoth crowd of supporters in a carnival fashion of presidential accolades ignited the trust and unity ANLCA needs as a professional Customs Brokers organization. 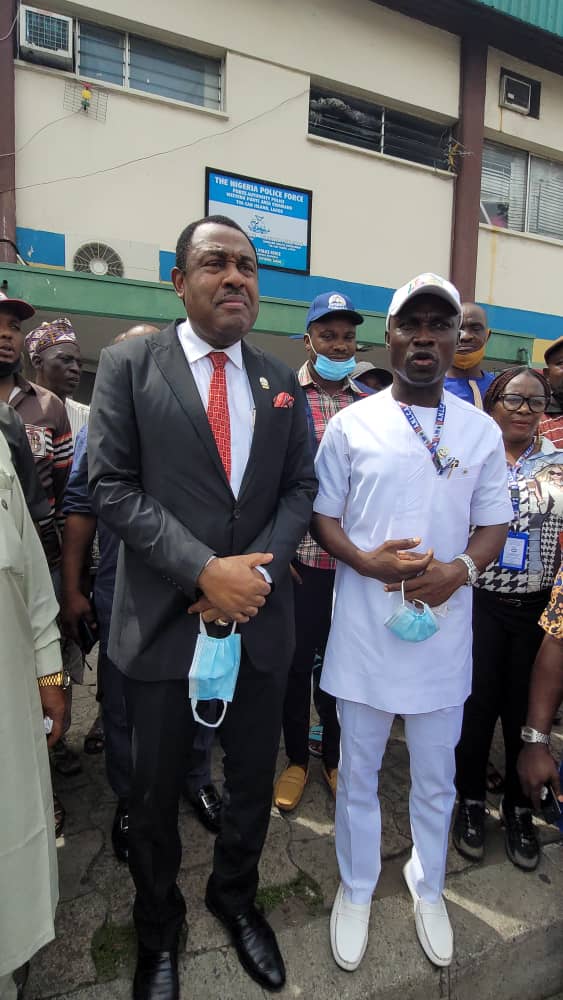 Nwabunike during the visit told the Customs Controller “this courtesy visit is in line with ANLCA’s age long principle of engaging critical stakeholders for better service delivery. It gives us the opportunity to exchange ideas and chat the way forward which ultimately will ensure ease of doing business in our border posts. 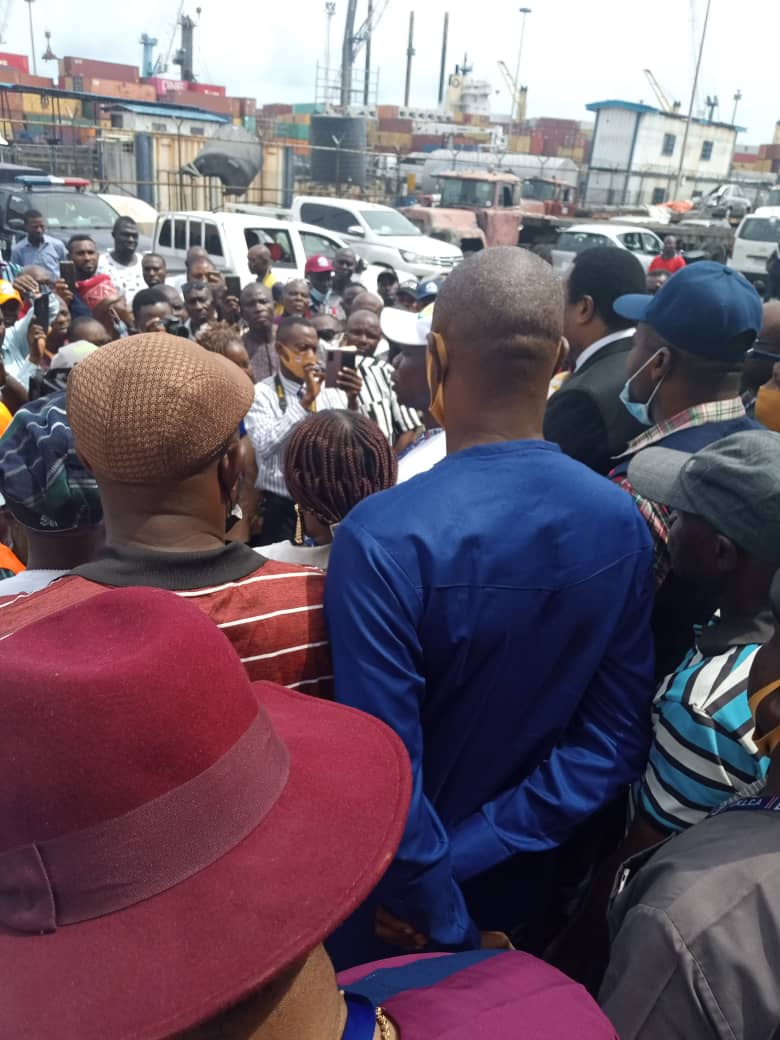 “I want to commend the Comptroller for the able way he has directed the activities of the command. Report getting to my office clearly shows that Tin Can Command is one of the best in the country in terms of ease of doing business and good relationship with our men on the field.”

The ANLCA president however called on the Customs Controller to look into issues like, Multiplication of Alerts, Duplication of Tables at the Terminal and Gates. Camp boys who act as Office Assistants that should facilitate the smooth flow of the process, but are turning to informants and false
whistleblowers, thereby becoming law and order unto themselves.

Others are, Issues of packages in the manifest which according to Nwabunike are becoming unbearable in Tin Can command in recent times and also, not being able to perform examination and release the cargo the same day.

Nwabunike said “Related to 4 above is the overriding need to ensure transparency and consistency of data of the Duty Payable Value (DPV) on Used Vehicles. This command is the focal point of most fledgling new entrants into freight forwarding practice and they are having a field day making things look as if NCS is not in control in that respect.

” Please use your good office to address the above. We wouldn’t mind if you set up a joint monitoring group to ensure that the right things are done at all times,” he said.

On his part, the Customs Area Controller of the Tin Can Island port Command, Comptroller Musa Baba Ahmed, thanked the ANLCA team for the visit and called on them to settle their differences and work as one body. He caution that a divided house cannot be of interest to the association. He promised to look into the issues raised by the ANLCA boss to facilitate trade in the command.

The ANLCA NP also presented the association’s in house publication “Customs Brokers Voice” to the Tin Can Customs Controller. He also took a working visits to the Tin Can Island Port Manager, the DSS office, the Police and others.

Nwabunike and the Tin Can Island Chapter Chairman, Ojo Peter later address their teeming members and supporters at the Tin Can second gate, which houses the Chapter’s Secretariat.
They were welcome with drums, trumpets and dancing in joyous and carnival modes all over the place.