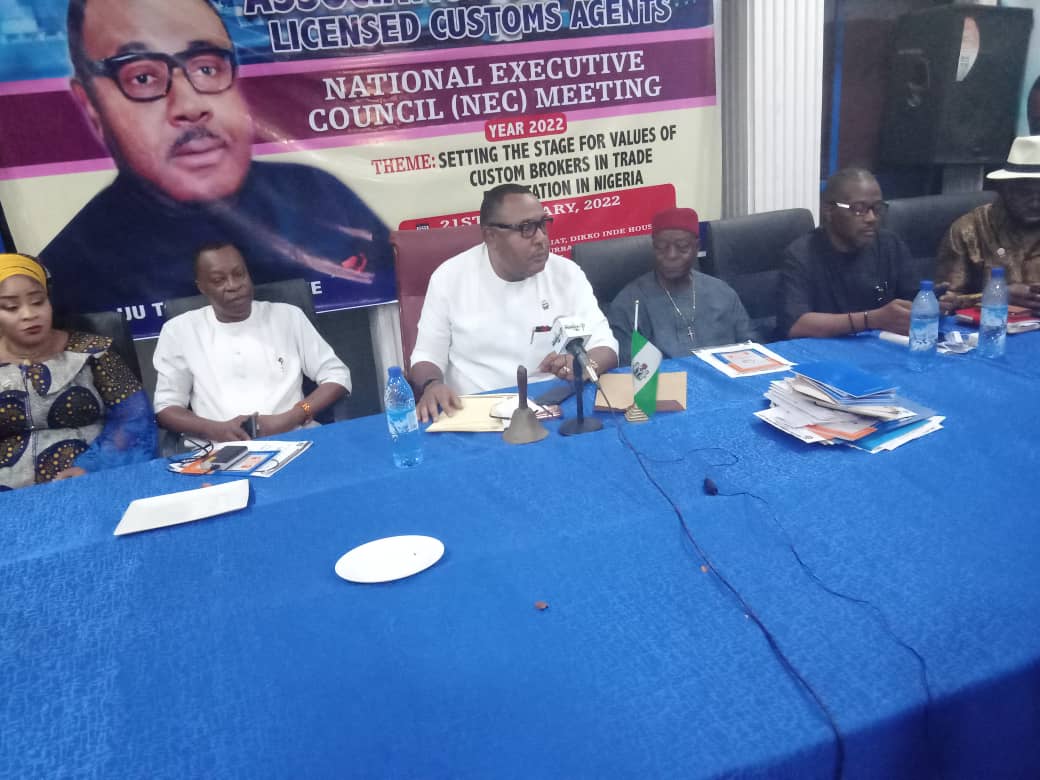 The Association of Nigerian Licensed Customs Agents (ANLCA) on Friday held it’s first National Executive Council (NEC) meeting for the 2022 fiscal year. The meeting which took place at the National Secretariat of the association in Lagos was to review and take critical decisions on sundry issues affecting the association. NEC is the highest decision making body of ANLCA.

In his opening address, National President of ANLCA, Iju Tony Nwabunike said he is very happy to see all members in good health and thanked God for all the successes recorded by the association in 2021. Nwabunike who based his address on three bullet points said ” First, we are aware that in one of the matters pending in court brought forward by former BOT members was put on hold on the instance of the Plaintiff seeking out of court settlement.

“Recalled that at the November NEC meeting, the NECOM sought the permission of this Council to settle with them out of Court and that was granted. Though, we have not made much progress in that respect, but we will be updated accordingly.

“Recalled also that at the last November NEC Meeting, the BOT nominated new ASECO members that was ratified and inaugurated by the NEC with the mandate to conduct election for Muritala Mohammed Airport Chapter in January of 2022. I am happy to announce that the election has been held, winners emerged, certificate of returns issued and those returned have been sworn into office and they are here with us today.

” I have to specially thank members of the BOT without which, the election wouldn’t have been possible. They showed resilience, commitment and sacrificed a lot for the association. I also thank the new ASECO led by Comrade Aloy Anokwuru for a job well done. They conducted what has been adjudged as peaceful, fair and credible election. I thank them immensely. I understood that in MMAC Chapter, the new administration have hit the ground running, establishing all inclusive government, making it a win win situation for all and sundry. Kudos to them.

“Since our invitation by the House of Representatives Committee on Customs Service, we have been in constant dialogue with the relevant authorities to ensure that areas of disagreement are looked into and resolved. We are still expecting the management of Nigeria Customs Service to heed the advice of National Assembly to establish NCS/ANLCA Consultative Forum where issues involving the two critical stakeholders can be amicably resolved”.

Due to the conditions in the letter, members had dismissed it and insisted that the association cannot be discussing with expelled members.
However, when pressed by newsmen on the way forward, the President, Tony Nwabunike said his executive has only one year to stay in office.Yet, he said if the expelled members were genuine on coming back to the association, it will take some processes.

According to him, the executive was open to peaceful resolution as well as on ground to defend its territory.The ANLCA president was of the view that if the expelled members really want to come back, it would be the NEC that will decide their case. He further described the outcome of Friday’s NEC meeting as “robust and successful”

“If they want to come back, it will be through a sequence. We have only one year to spend in office. We cannot stay more than one year. I always let them know if they want to come back, and they go through the sequence, which is the NEC, It is not me Tony Iju that expelled them, then, the NEC meeting will begin to review their cases as it were to know if their case is going to be sorted out. For us we are very open to any peaceful resolution to date, and equally we are on ground to defend our territorial integrity”.