NAFEST 2022: LAGOS STATE PLANS TO MAKE IT BEST OF ITS KIND 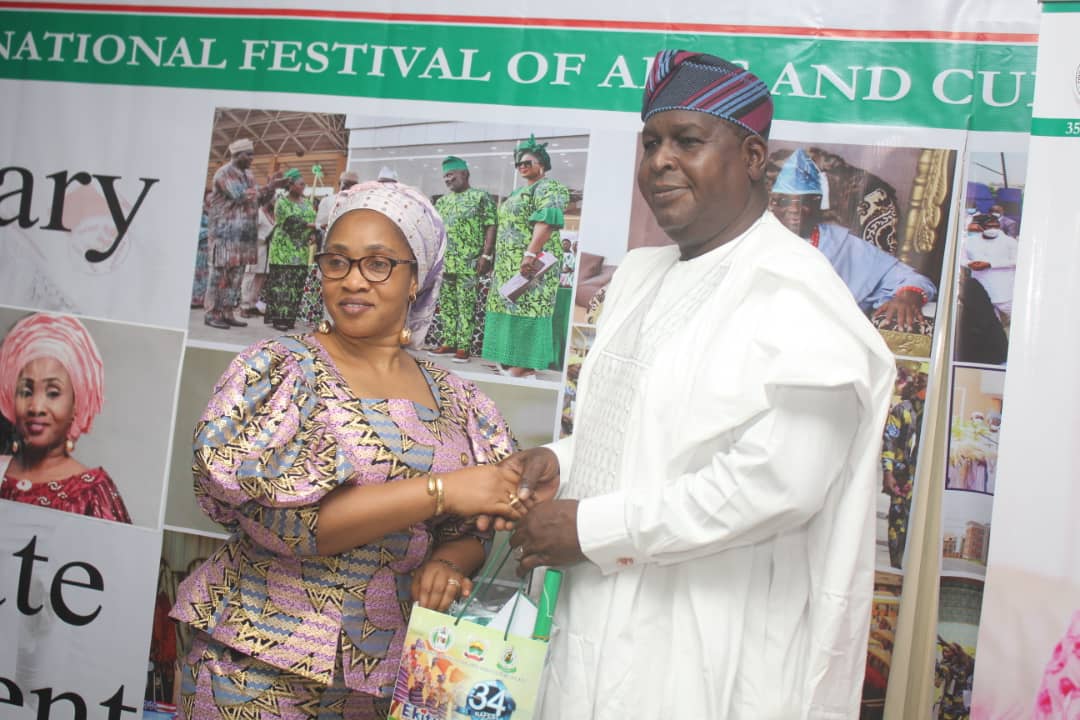 This understanding was reached at the preliminary meeting between officials of the Lagos State Ministry of Culture and Tourism and the National Council for Arts and Culture in preparation for the 2022 edition of NAFEST held at the Council’s headquarters in Abuja.

The Director General, National Council for Arts and Culture, Otunba Olusegun Runsewe who hosted the meeting welcomed the high powered delegation led by the Honourable Commissioner for Culture and Tourism, Pharm (Mrs) Uzamat Yussuf to his office in Abuja.

Otunba Runsewe congratulated the Lagos State Government for winning the hosting right for NAFEST 2022 which was a big contest adding that the festival which is the foremost cultural event in Nigeria has hitherto been a platform to unite the nation through Arts and Culture.

Runsewe stated that the festival which grows richer, bigger and better with every edition would provide a strong platform for Lagos State which is the centre of excellence to bring its well-known finesse to bear in making the EKO NAFEST 2022 the best of its kind in the history of the festival.

“The essence of the Pre-NAFEST maiden meeting is for us to interact and brief you on details of hosting the festival which will bring together contingents from the 36 States and the FCT to Lagos State during the fiesta” Otunba Runsewe reiterated.

In his interaction with the delegation, the NCAC boss also explained that the festival would have implications for the state’s facilities including comfortable and accessible accommodation, logistics and security amongst other things.

Said he “As a build-up to the event, Lagos State shall host a National Technical Committee (NTC) meeting comprising of Commissioners and the Directors of State’s Arts Councils and the Management of the NCAC”. He further explained that the National Technical Committee serves as a platform for reviewing and adopting the syllabus for the festival as well as inspection of venues for various events.

In her reaction, the head of the Lagos State delegation and the Commissioner for Culture and Tourism Pharm (Mrs) Uzamat Yussuf expressed delight for the warm hospitality shown them by the Council boss.

The Commissioner stated that their visit was informed by the need to reaffirm to the National Council for Arts and Culture the readiness of Lagos State to host the 35th edition of the festival.

“We are here to learn the modalities and all that is required to be a successful host because we want to host the best of NAFEST in the history of the festival” she assured.

Also speaking, the Special Adviser to the Lagos State Governor on Culture and Tourism, Honourable Solomon Bonu revealed that the quest for the 2022 hosting right began in 2020 when the festival was hosted by Plateau State.

According to Honourable Bonu , Lagos State had to improve on their facilities to meet all criteria set by the NCAC to emerge winner. He therefore assured that as against the seven days that the festival normally hold, Lagos State will hold a Pre-NAFEST for seven days preceding the main event. This will be an opportunity for all local government areas to showcase their rich cultural heritage.

The Permanent Secretary, Lagos State Ministry of Culture and Tourism, Mrs Oyinade Nathan was part of the Lagos State delegation.

Highlight of the visit was the conferment of the title of “MAMA NAFEST 2022” to the First Lady of Lagos State, Her Excellency, Mrs Ibijoke Sanwo- olu who will be expected to host the children during the festival.