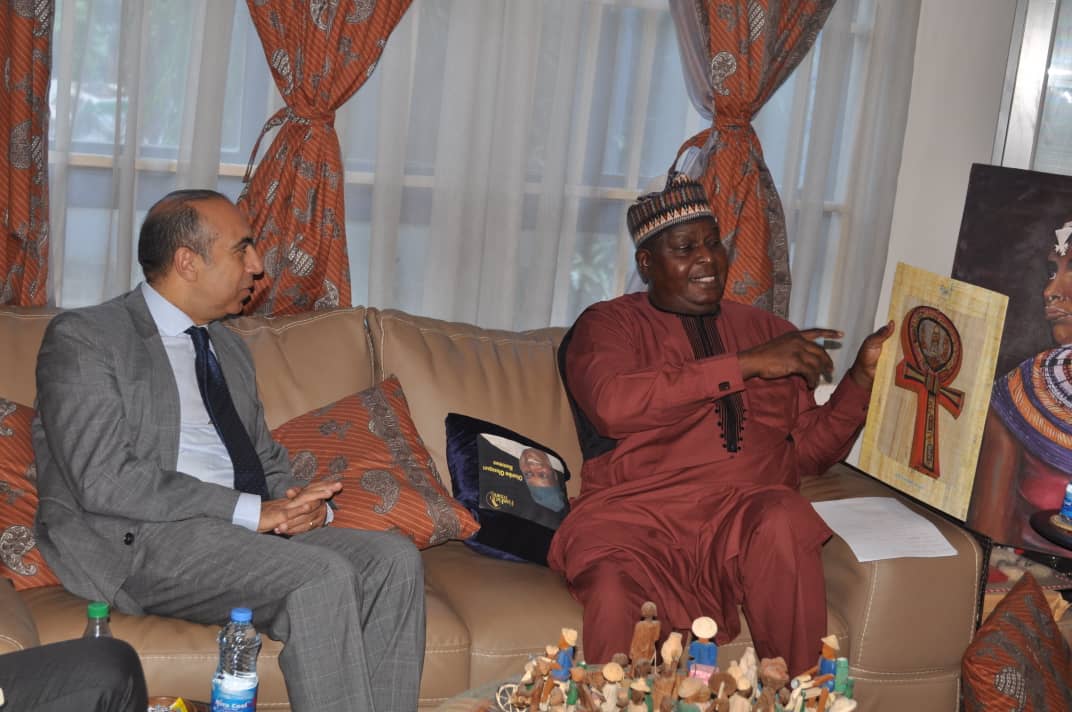 DG NCAC Otunba Olusegun Runsewe (right) appreciating an art work from Egypt. With him is the Egyptian Ambassador to Nigeria, HE Amb. Ihab Awad. during his visit to NCAC.

Nigeria and the Republic of Egypt have agreed to deepen their bilateral cooperation through a Memorandum of Understanding (MOU) on ways of developing their Arts and Crafts sector.

This is one of the decisions reached when the Director General, National Council for Arts and Culture, Otunba Segun Runsewe recieved in audience a delegation from the Republic of Egypt led by His Excellency, Ambassador Ihab Ahmed in his office.

The Egyptian ambassador remarked that he has been following the activities of Otunba Runsewe who has positively projected the image of Nigeria at both home and abroad within the culture and tourism space, adding that Runsewe is asiduously working to transform Nigeria’s rich and diverse cultural heritage into a viable economy.

The Envoy who stated that there was a lot of similarities between both countries in the area of arts and culture added that the Republic of Egypt was exploring ways of strongly collaborating with Nigeria through the NCAC to create a platform to showcase both country’s rich cultural heritage.

He further revealed that the Egyptian embassy is working on an action plan which will enable Otunba Runsewe and his management team visit the Republic of Egypt to see the enomous opportunities in the arts and culture sector, which will culminate in the signing of a Memorandum of Understanding (MOU) for it’s development.

The head of the Egyptian delegation solicited the assistance of NCAC to create a window where arts and crafts products in the Egyptian can be exhibited in Nigeria as plans have reached an advanced stage for both countries to synegize in that regard.

The Ambassador then assured of the the full participation of his Embassy at this year’s International Arts and Crafts (INAC) Expo coming up in August.

In his speech, the Director General of NCAC, ,Otunba Segun Runsewe who thanked the delegation for the visit expressed joy that the diplomatic relationship between both countries have witnessed robust growth over the years.

According to Runsewe, Nigeria and Egypt share a deep cultural history which has advanced the socio economic development of both countries given their commitment to ECOWAS treaties and IMF leaving both countries with similar and stronger values.

Runsewe who is also the President of the World Crafts Council, African Region reiterated the need for Nigeria and the Republic of Egypt to work towards harnessing their rich tourism potentials. He then revealed his plans to launch the NIGERIA- EGYPT FRIENDSHIP CLUB during his visit to the ancient city of Egypt to foster growth and deepen diplomatic ties between the countries.

Runsewe used the occasion to invite the Ambassador to the annual Pre- INAC dinner for the diplomatic community coming up in May this year and expressed his readiness to provide a Worldclass Media platform during the 2022 International Arts and Crafts (INAC) Expo where all participating countries will have equal opportunity to showcase, network \ and market their rich cultural strengths to the world.

There was also exchange of cultural souveineres between the Director General and the Egyptian delegation.